The average cost of stamp duty and other compulsory property purchase fees for a property worth USD3.5 million is now 3.4%, compared to the average 2.6% tax burden on more modest properties with a purchase price of USD150,000.  This has been pushed up by recent purchase tax increases on high end properties in countries such as the UK and Spain.

Spain and the UK have some of the highest property purchase taxes targeted at prime properties, which are seen as attracting a large proportion of overseas buyers.

The UK levies 7% stamp duty on property purchase over USD3.1 million, while Spain’s average taxes and charges of 7% mask a shift towards higher marginal rates for the most expensive properties.   In regions popular with wealthy local and foreign buyers, including the coastal provinces of Andalucía, Cantabria and Asturias, and the Balearic Islands, rates vary from 8% to 10% for more substantial properties.

Earlier this year Hong Kong doubled the rate of stamp duty charged on properties of over HK$2million to 8.5%.  In mainland China, the most expensive properties attract stamp duties and other taxes of 5% of the property’s value, compared to 3% for lower value properties.

Ladislav Hornan, chairman of UHY explains: “In the wake of the financial crisis, national and regional governments have been desperate to plug their deficits.  One populist way to do this has been by levying new top rates of stamp duty on the purchase of the most expensive properties, which often attract foreign buyers.  When the new top rate was announced in the UK, it was in part a response to left-of-centre politicians’ demands for a so-called mansion tax.”

“While some markets might be sufficiently robust to absorb this, governments do need to be careful not to kill off their property market altogether. Economies benefit from the added value that wealthy buyers and an active property market bring to the economy, from spending on refurbishments, to legal fees and employing domestic staff.  Once High- Net- Worth individuals leave, it is hard to attract them back.”

Ireland, despite moving to a flatter stamp duty structure in the wake of the financial crisis, still charges double the rate of stamp duty on the proportion of a property sale exceeding Euro€1,000,000.

UHY also point out that many European economies that do not target prime properties in particular still have relatively high overall property purchase taxes, averaging nearly 4.5% for France, Italy, Austria, the Czech Republic and Germany.

Ladislav Hornan adds: “By imposing often very significant additional costs on the purchase of a property, governments may be discouraging people from moving for a new job, especially those with families who might reasonably expect to own their own property.”

“That means that employers have to offer significant pay rises to lure talented staff to a new location, workers opt to do jobs that are below their skills and experience rather than move.  High levels of stamp duty are an easy fiscal option, but in a prolonged recession, they may be a short-sighted one.”

Bernard Fay, co-managing partner of UHY Fay & Co, the Spanish member firm of UHY, says: “Since 2010, regional governments in Spain have made much greater use of their discretion to set their own stamp duty rates, with the result that rates have gradually shifted upwards, especially in areas popular with high net worth individuals and international buyers.”

“Combined with other tax requirements, targeted at wealthy international families, it is starting to make Spain look unwelcoming towards exactly the sort of people who have sustained the economy of many coastal regions of Spain for the last few decades.”

UHY tax professionals studied tax and compulsory property registration charges in 25 countries across its international network, including all members of the G7, as well as key emerging economies. UHY calculated the total taxes and compulsory fees payable to local, state and municipal government on property purchases of USD150,000 and USD3.5million. 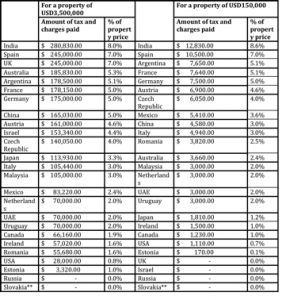 The calculations assume that both buyers and sellers are private individuals from the country concerned.  Special exemptions, e.g. for new properties, are not taken into account.

Russia charges a nominal fee for the registration of new property purchases.  The UAE charges a compulsory 2% of the property price to register a property transaction at the local land department.  The total taxes and fees for Austria include a 1.1% land register fee.